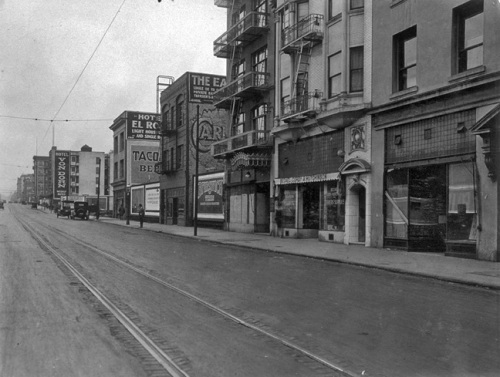 Lower Turk, 1920. Note the glass-paned marquee over the entrance to the Camelot Hotel.

The Port Hole, 1942. Newscopy: “The Port Hole, 126 Turk Street, provides its patrons with song and rhythm de luxe. Above are (left to right) Bud Seghiari, ‘groan box’ artist extraordinary; Evelyn Thompson, Sadie Shipley and Judy Blair (seated on the piano), mistresses of song; Dave Olson at the piano and Larry Duran with guitar.”

In 1948 the Port Hole moved to the first block of Mason Street, where it continued to operate into the 1950s. During the years that Treasure Island was an active US Navy base, the Tenderloin bars favored by on-leave sailors were the Port Hole, the Blue and Gold at 136 Turk, and the Coral Sea at 220 Turk. 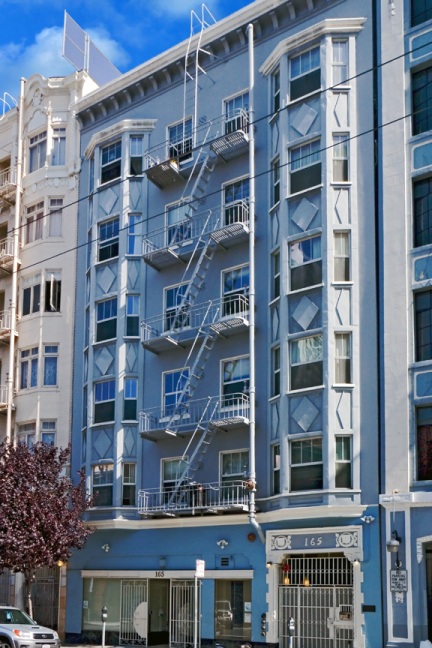 The storefront at 335 Jones Street (identifiable in this photo by the blank, pink-colored blade sign) was formerly the Black Rose, a transgender bar that featured live impersonations of famous female singers. A friend of mine, Nikki Harris, used to perform there as Ella Fitzgerald. The St. George Apartments were originally named for Laura Lowell Gashwiler, widow of a gold mining millionaire and one of the first kindergarten teachers in the United States.

The parking lot on the corner of of Turk and Hyde is the site of the legendary Black Hawk nightclub, where on the evening of 21 April 1961, Miles Davis recorded his landmark album, Miles Davis In Person Friday Night at the Blackhawk, San Francisco.

Black Hawk nightclub, 1959. Local artist Robert McClay (left) and John Lewis of the Modern Jazz Quartet outside the entrance to the club.

Johnny Mathis was discovered at the Black Hawk. When a local sextet brought young Johnny to one of the club’s regular Sunday afternoon jam sessions in 1955, club co-owner Helen Noga heard him sing and decided that she wanted to manage his career. Shortly afterward, Johnny got a regular gig singing at Ann Dee’s 440 Club, and Helen talked the head of jazz A&R at Columbia Records, George Avakian, into seeing him. After coming to the club and hearing Johnny sing, Avakian sent a telegram to his record company: “Have found phenomenal 19 year old boy who could go all the way.” And go all the way he did. 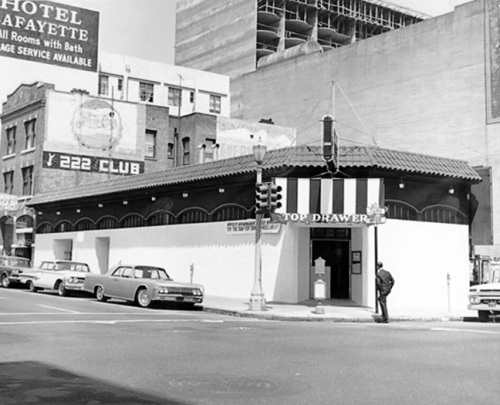 Top Drawer, 1964. After its final closing, the Black Hawk was briefly reincarnated as the Top Drawer lounge. The building under construction in the background is the Eddy Street Central Tower (now one of the Mosser Towers).