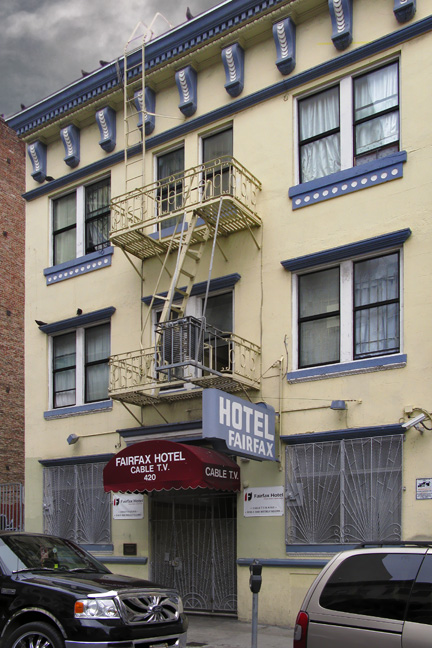 Having lived a month in a dismal crib at the Sai Hotel, I was more than ready for a change, but the only vacancy I could find was a room at the Hotel Fairfax, a haven for heroin-addicted hustlers, prostitutes and crackheads. Peace and quiet were the rarest of commodities at the Fairfax. Management rarely ventured beyond their first-floor enclave, and hotel housekeeping was spotty and superficial at best. The upstairs bathrooms and toilets were unspeakably vile. For the most part, tenants were free to carry on however they pleased in shadowy hallways and on dark, winding stairs at all hours of the day and night. In need of a temporary hideout or a bathroom, or for reasons best left undiscovered, all kinds of unsavory characters would lurk about the upper floors late at night after sneaking up the rear fire escape. In the end, five weeks at the Fairfax was all I could stand. Long after I moved out, Cohen Alley was gated and turned into the “Tenderloin National Forest” by the Luggage Store Gallery, effectively ending the hotel break-ins, but as far as I know, little else there has changed.