On 25 July 2008, the State Historical Resources Commission voted unanimously to create the Uptown Tenderloin Historic District, with Federal approval and the district’s addition to the National Register of Historic Places likely to follow in as little as 45 days. Thanks to Leroy and Kathy Looper and Randy Shaw, who spearheaded the effort; to Elaine Zamora and the North of Market/Tenderloin Community Benefit Corporation, Dina Hilliard of TNT (The New Tenderloin), David Seward, U. C. Hastings, and Captain Gary Jimenez of the Tenderloin Station for their rock-solid support; and to Michael Corbett, architectural historian par excellence, for his dedicated work, resulting in the extensive, highly detailed survey that won the state’s approval and for which I had the distinct honor of being the photographer. The entire community was pulled together by this endeavor, which holds such promise for making the Tenderloin a better place for all. Survey photos can be seen here. 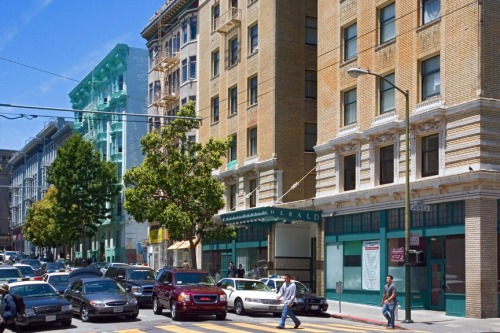 One response to “It’s Official!”